German banking: No growth limits for IT providers?

Banks have always been among the largest IT spenders of any industry.  Over the past years, there has hardly been a bank which has not complained about the increasing cost of IT, spurred by regulation and digital banking. Is this just a perception or do German banks rightfully grumble about increasing IT cost? Unfortunately, there is no comprehensive data to validate the claim, but using financial statements of many bank IT providers, we can at least trace some of the cost evolution.

For this purpose, we have looked at the financial statements of 15 IT companies that primarily serve the German banking market. These include the two large de facto captive providers of the savings bank and cooperative banks sector, FinanzInformatik and FiduciaGAD.  Certainly, the data needs to be treated with a grain of salt as the delineation of services, clients, cost, and legal entities in the financial statement is less than a perfect match with German bank IT cost overall.  However, we believe the data provides some valid indications.

Collectively, the bank IT providers analyzed in our paper generated €4.3 billion euros of revenues in 2019, up from €3.4 billion in 2015.  This is an increase of 6.7% every single year.  The selected private firms managed to increase their revenue base by more than 11% annually (some of it through acquisitions). The de facto captive providers FinanzInformatik and Fiducia GAD experienced average annual growth rates of 5% and 7.6% respectively. 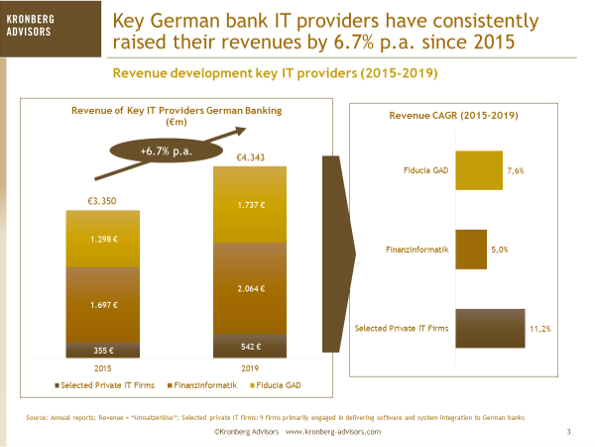 During the same period, German banks’ total operating costs have stayed flat.A  This means that a higher proportion of the banks’ cost base has been consumed by the IT providers analyzed. The reasons for this increase can be manifold, including a conversion of internal IT cost to external providers, an increase in the scope of functionality, or price increases by the providers. While we cannot infer that German banks’ IT cost has risen in line with the revenue increase of bank IT providers, the data seems to underpin this assumption.

The bank IT providers analyzed have increased their staff since 2015 at a substantial annual rate of 5.4%. Their business growth evidently required them to build up their workforce. During the same period, bank employment decreased by an annual rate of 2.7%.

The payroll cost difference is more pronounced in the savings bank sector: Their captive IT provider Finanz-Informatik spends about €108.000 payroll cost per employee, while the average savings bank comes in at about €64.000. This 69% premium on IT provider staff cost could be explained by a lot of factors, including scarcity cost of IT talent, different collective bargaining agreements, one-off effects in the 2019 financials, etc. It is noteworthy that the payroll differential in the cooperative bank sector is smaller (51%) and payroll cost per staff are lower in absolute terms both for bank staff and bank IT provider staff. FinanzInformatik’s payroll cost per staff are more than 20% higher than at its rival Fiducia GAD. Again, there can be many reasons for this differential, but it would be interesting to explore the underlying drivers for this more. 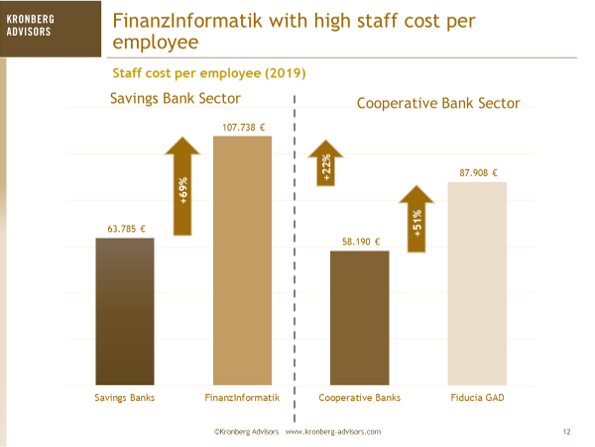 Just like banks rely on bank IT providers, the latter rely themselves to a substantial share on third parties to deliver their solutions. About 47% of the cost base of the bank IT providers are procured cost, mostly for external services, which is up from 45% in 2015. 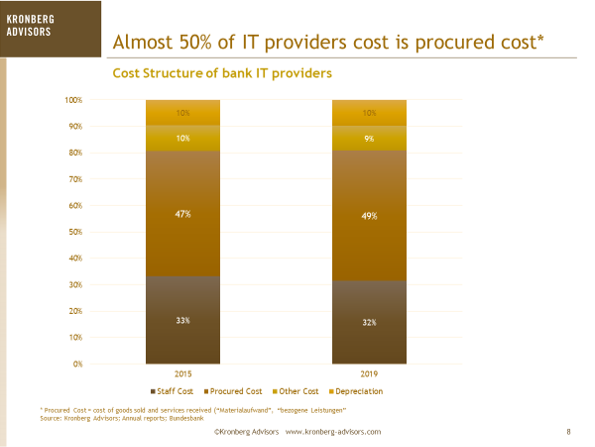 With all due caveats on the data, the above analysis provides some indications on the evolution of bank IT cost: While German banks have shrunk staff and capped cost, bank IT providers have seen their revenue and staff grow at health rates between 2015 and 2019.

The bank IT providers’ growth could indicate several structural trends in bank IT: (1) A need for the banks to spend more on IT, (2) an increase in outsourcing or handing-off hitherto internal IT work to specialized providers, and (3) a concentration in the bank IT provider base.

While banks seem to see their business and revenues under attack, bank IT providers appear to have been experiencing a sustained positive economic evolution over the past years. It has been more pleasant to be a supplier than a customer. Will it continue?