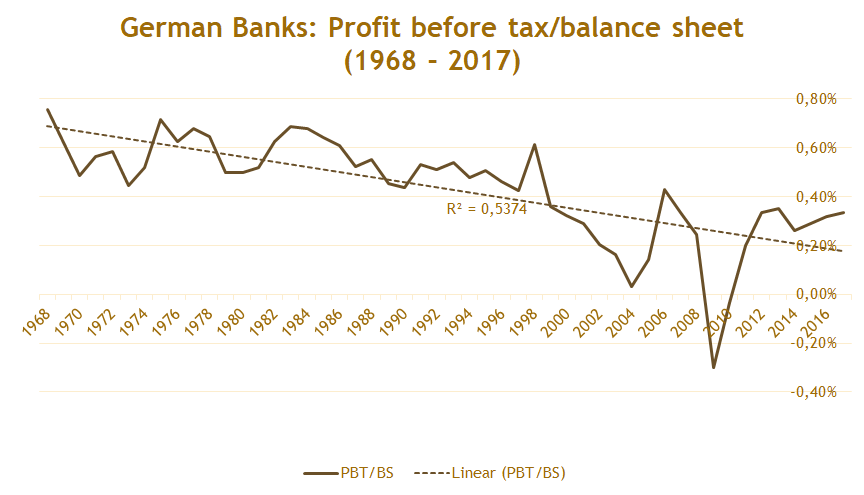 German Banks: What happened to their profitability in the past 50 years?

The unsatisfactory profitability of German banks is often blamed on the current low-interest environment, increasing regulation, and competitive distortion.  However, looking at 50 years of Bundesbank data on the German banking industry reveals that its profitability problem has its origin in the 1990’s.  Banks have not made the necessary changes to their business model.  Without a combination of revenue-generating business expansion, product innovations, distribution turn-around, and structural cost management, the outlook for German banks will remain modest.

Bank profits: Steady erosion – and tectonic shifts from 1999 on

Based on 50 years of Bundesbank data, German banks have gone through two eras of profitability:  From 1968 to 1999, a slight but steady erosion of profitability can be observed – but at an average of 0,56% of balance sheet volume, profit before tax was still relatively stable.  From 2000 on, the old profitability structure has given way to tectonic shifts, clearly marked by the 2001 and 2008 economic crises. Profitability has since not come close to the levels of the previous era.

Bank revenue margins slipped in the 1990’s and never recovered

The below chart disaggregates the key profit components, i.e. revenue and cost margins (in relation to balance sheet total). 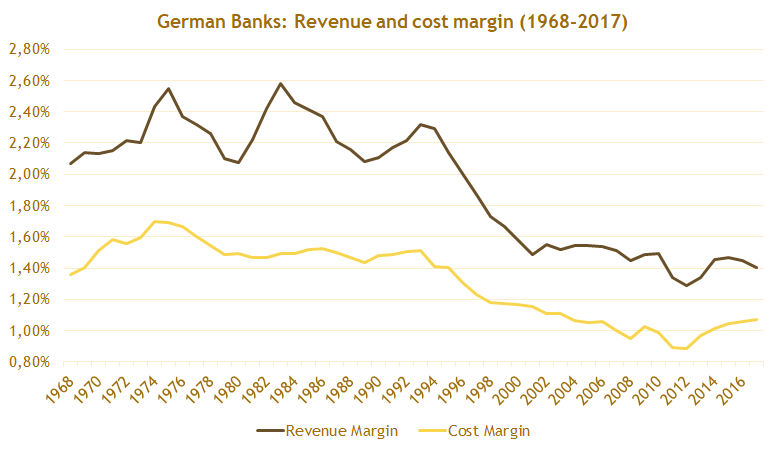 It is striking that the revenue margin dropped sharply during the 1990’s, while the cost margin reduced much less.  Consequently, the banks’ net operating margin more than halved from 0.72% in 1968 to 0.34% in 2017.

The key revenue components of banks are net interest income and net commission income – we are ignoring trading income in this analysis, as it never accounted for much more than 5% of bank revenues in Germany.  Examining what drove down the revenue margin, we can observe the rapid shrinkage in net interest rates (expressed as net interest income over interest-bearing assets) in the decade following German reunification.  Average net interest rate between 1968 and 1993 was 1.97%.  By the year 2000, it had slid down to 1.42% - a decline of almost 30%.  Since then it has been surprisingly stable at 1.4%, despite the ECB’s low-interest rate policy. 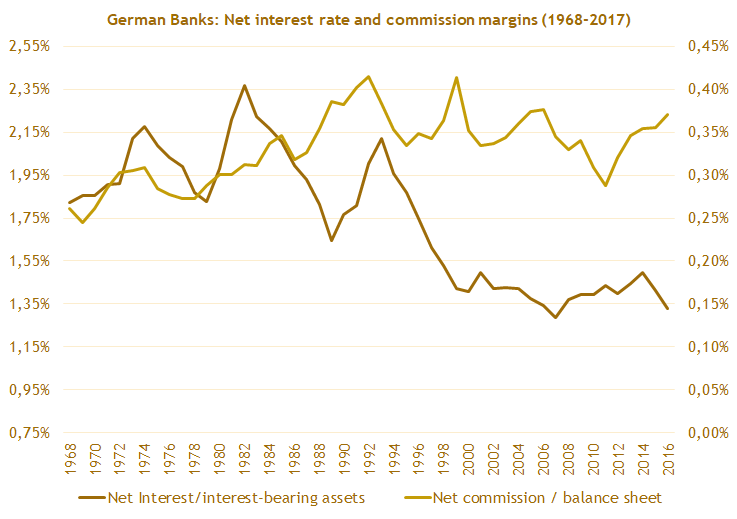 What exactly happened in the 1990’s and why German banks have been stuck with their low net interest rate for almost 20 years, requires a closer look.  While this goes beyond the scope of this paper, a few observations should suffice here:

German banks rapidly expanded their balance sheets in the 1990’s following German reunification and the creation of the European single market – accompanied by significant rate cuts by the Bundesbank.  Economic theory would suggest that the net interest rate gets squeezed by the growing cost of funding.  Indeed, German banks increased their capital market funding through debt issuance much stronger than they grew their deposit base.  But on the other hand, if demand for loans went up, why did the banks not increase their asking price for credits, maintaining a healthy net interest margin?  Did banks price their lending too cheaply?

Whatever the exact reasons for this phenomenon, the fact is that the German banking industry experienced a structural decline of its net interest rates in the 1990’s and has been stuck in it for over 20 years now.

The decline of net interest rates has not been offset by a corresponding rise in net commission income:  Over the past 35 years it has been stable at 0.3% to 0.4% of balance sheet. 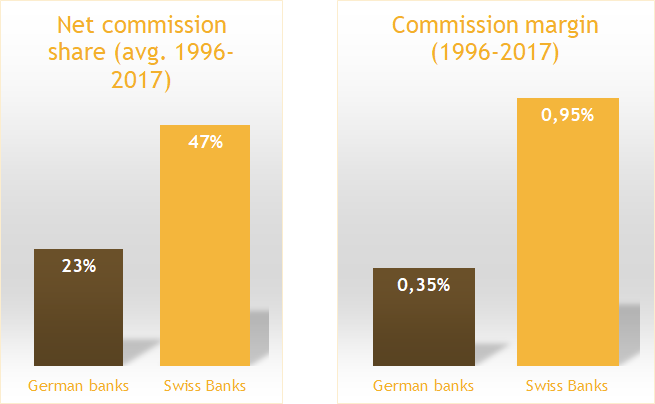 While the Swiss banking landscape with its high share of private banking and asset management has a different structure and price points than Germany’s, it is clear that German banks have missed out on reducing their dependency on more volatile interest income.  Furthermore, banks seem to have given away a lot of services for free, e.g. cross-subsidizing current accounts from interest income.

Remarkable progress on cost management – but too focused on personnel reductions

The cost margin of German banks (cost over total balance sheet) has come down significantly over the past 50 years.  During the 25 years from 1968 to 1993, the average operating cost margin was 1,5%.  With the strong expansion of the banks’ balance sheet following reunification, the German banks seem to have captured economies of scale, thus lowering the cost margin substantially.  However, since 2001, the cost margin has been 1,03% on average and fairly flat.  Overall, the cost improvement has been far less than the corresponding revenue margin decline would have mandated.  This suggests that the industry has not managed its cost rigorously enough over the past 20 years.

Banks have worked well on reducing their personnel expenses – from a peak of 1.18% of balance sheet volume in 1974 to 0.54% in 2017.  However, non-personnel cost has remained flat.  Perhaps this is not surprising, as the reduction of staff was partially a shift of personnel to external providers via outsourcing, or enabled by additional investments in technology.  New cost items have also been added to operational cost, e.g. through new regulation or contributions to bank rescue funds.  But whatever the reasons are:  If German banks want to increase their profitability, they must catch up on the cost reduction.  Non-personnel cost reductions will need to play a much bigger role in this than they have.  Banks need to find ways of drastically reducing the key non-staff cost items (IT, buildings, service providers, consulting; legal; audit costs).  Still, further staff reductions or labor productivity measures will be needed. 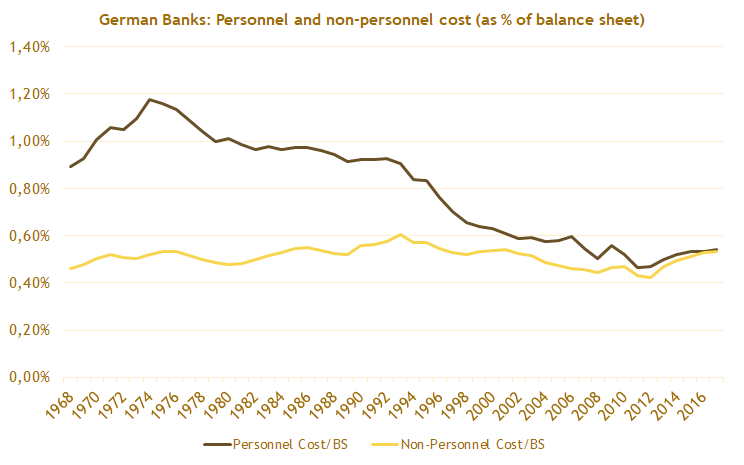 As the discussed historical data suggests, German banks need to work on their revenue structure – generating new revenue pools and reducing their over-reliance on interest income.  Here are some practical suggestions:

Generate new business volume: The largest impact could come from generating more business volume.  For example, it is surprising that despite decades of public programmes to stimulate home ownership, the percentage of German households that either live in their own property (ca. 44%) has hardly changed.  If Germany had the average home ownership rate of the Eurozone of 61%, this could add another ca. €400 billion of balance sheet and north of €4 billion of annual revenue to banks.  Have banks been active enough with other constituents – e.g. with policy makers – to promote home ownership, make it affordable and help with the funding?

Recapture payments:  Most banks have left this field to specialists, e.g. divesting their shares in card operations.  The lucrative parts of the payments business that is now run by giants like WorldPay, PayPal, Wirecard, Worldline, MasterCard, Visa or Adyen was once the domain of banks.  It may be impossible to reverse this, but it should at least serve as a lesson of what happens when you exit core business lines.

Drive pensions and investments:  As we have already argued in a previous paper, German private households have a dismal financial asset allocation.  Here, the German banks should be more like the Swiss banks, enabling and growing securities ownership.  It is a win-win situation both for consumers and the banks.  A good avenue is through employer-based pension schemes which banks have mostly left to insurance companies in the past.

Deliver on distribution:  Banks are not known to be very good sales and distribution players.  A substantial part of financial products in German is not sold through banks, but insurances and their agents and brokers.  It is not clear why banks are so passive and uninspiring in their distribution.  Billions of Euros are lingering in unproductive sight deposits or low-return life insurance.  These monies will not move to other products by themselves.

Make attractive products – and explain them:  Many bank products are either not very exciting, differentiating or good at all.  And banks have been very opaque about pricing, commissions, etc.  In addition, many retail customers are afraid of financial matters.  Without a lot of education and explaining, financial products will not sell.  Banks need to rethink how they do this – fancier flyers will not do the trick.

A new era of cost management is needed

Share IT cost: IT accounts for 15% to 20% of bank operating cost and needs to come down faster and further.  Banks will need innovative ways, e.g. collaborating much more on IT and reducing their individual requirements and relying more on industry standards.

Challenge costly parts of the business model:  Take securities systems and processing as an example, which are complex and expensive.  For virtually all retail bank customers, there is no business rationale to trade individual stocks and bonds – and most banks are not capable of providing the advice needed for this at affordable cost points.  A mutual funds or ETF-based wealth management is the appropriate solution.  As demonstrated by specialist banks in this field, it is tremendously less expense to operate a securities system just for funds / ETF’s than it is for stocks and bonds.  Bold banks kick out their complex securities systems and work with simpler “funds only”-solutions.  This would also be in the interest of their clients.

There are certainly more dimensions affecting bank profitability than the factors we have discussed here – cost of risk, non-recurring items, capital, etc.  But it is helpful to start with a high-level picture, before making all the complications.  Our key conclusions are:

Note:  The data in this article are taken from the statistical series of the Bundesbank, European Central Bank, and the Swiss National Bank which are available on their websites.