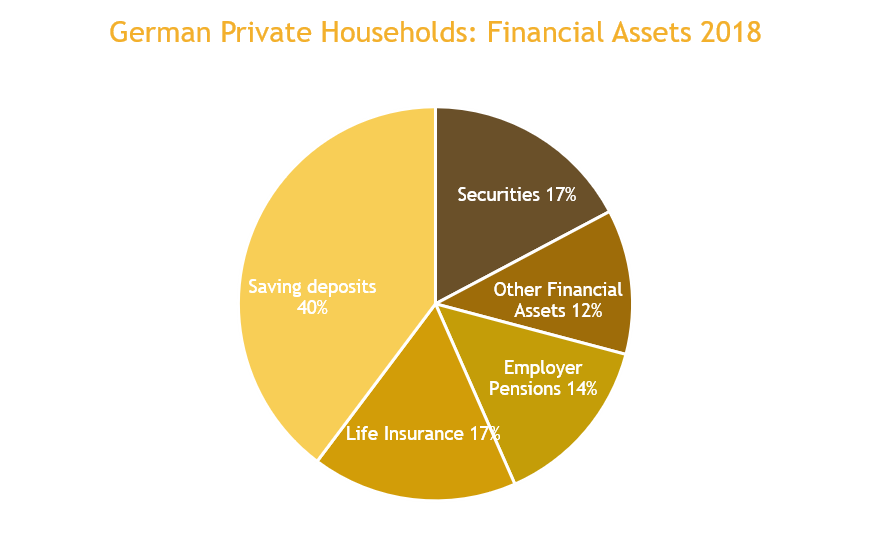 Financial technology providers in the German market have focused on opportunities generated by increasing regulation (like MIFID2, PRIIP) and market liberalization (particularly in the payment arena, e.g. PSD2).  Innovation efforts in the wealth management space have been fairly limited and focused mostly on robo-advice and similar solutions.  But these solutions have not managed to gain traction beyond a small niche.  It is surprising that the tech industry has not leveraged technology to overcome the key obstacle:  Germans’ fear of and disinterest in long-term investments in financial securities.  Addressing this potential would make German households richer and generate a revenue pool for financial service providers and their technology partners.  For this to happen, Wealth Tech solutions need to become prospect-centric – instead of the client-centric perspective which solely addresses existing clients.

German private households keep almost 80% of their wealth in real assets like real estate, private businesses, valuable or cars.  Just about 20% of Germans’ wealth is represented by financial assets – from savings accounts and life insurance to securities[1].

Real and financial assets have been growing at roughly by 3% p.a. since 2011[2].  Despite nominally getting richer, Germans seem to have opted for becoming poorer.  The vast majority of Germans’ financial assets is in low-return financial products.  40% are stuck in deposits (and within this category almost two-thirds in non- or very low interest-bearing sight deposits).  Another 17% are tied-up in life insurance.  Employer-run pension schemes account for 14%.  Investments in stocks, bonds, and mutual funds account for only 17% - while the rest is made up by a variety of other financial assets[3].

With this asset allocation, German households on average reach a return of about 2.5% p.a.  This is less than the 3% annual return which the statutory German retirement system estimates for an average employee who pays her mandatory contributions to the national pension scheme[4].  To put it provocatively:  German households would be better off to put all their money into the national retirement scheme instead of all the products they buy from the German financial services industry.

One of the reasons for this is that Germans are not diversifying their financial assets more.  Ownership rates of real and financial assets have been incredibly stable over the past 7 years.  Contrary to the popular belief that Germans have rushed into real estate, the penetration of real estate ownership has not moved a lot:  Just over 50% of German households own residential or commercial real estate – with a marginal ownership rate increase over the past 7 years[5].  On the securities side, the picture is the same:  The ownership rates for financial securities have basically not changed between 2011 and 2018 – around 17% of German households hold securities[6].

So, it almost looks like Germans cannot be persuaded even under dire circumstances to change their behavior with regards to their wealth allocation for their own benefit.  A closer look seems to reveal that an underlying growth momentum in securities ownership is heavily weighted down by customer helplessness and inertia.

The industry think-tank “DAI”, which has been tracking stock ownership of Germans since 1998, reports a steady increase of shareholder-ship since 2010[7].  Following a steep increase during the “New Economy” in the late 1990’s, a record 12.1 million Germans held stock (either directly or through mutual funds) in 2001.  With the collapse of the new economy and later the financial crisis 2007/2008, this number dropped nearly 35% by 2010, only picking up gradually since then.  Yet, 87% of Germans have not considered investing in stock over the past 12 months – and 83% report that despite the low-interest environment, their interest in stock investment has not increased[8].

Against this backdrop, it cannot be a surprise that the single biggest increase in Germans’ financial wealth has been in sight deposits – which since 2011 have doubled in volume by a whopping €628bn[9] – which is an increase of more than €15.000 per household!  The money to invest is there – it is just put in the terribly wrong place.

Germans have put an absurdly high amount of wealth in unproductive assets.  This is a ”loose-loose”-situation for banks and customers. For banks, these deposits – tied to negative interest rates – generate losses from the outset.  And the depositors loose wealth, as low interest coupled with inflation barely maintain the value of the asset.  The opportunity losses for investors are immense.  The picture grows dimmer when you take into account risk:  Deposit-prone German private household are heavily exposed to the German banking system - instead of the diversified global capital market.  In terms of a risk-return-matrix, Germans could hardly have chosen a worse spot.

It is time to turn this “loose-loose”-situation into a “win-win”-situation:  Banks can create a new revenue pool – and German households can accumulate wealth. And WealthTech companies that enable this will participate in the revenue opportunity.

Just imagine if the €628bn that have been poured into unproductive sight deposits since 2011 had been invested in the global capital markets instead.  The comprehensive global stock index MSCI World (which covers about 75% of the global investable stock market) generated an average annual performance of almost 12% in Euro-terms between 2011 und 2018.  Had the inflows into sight deposits been fully invested into the MSCI World, German households would have been €243bn richer at year-end 2018 than they actually were – or almost €5.900 per household – net of product cost and capital gains tax.

The financial services industry could have generated additional revenues since 2011 of more than €28 bn, assuming 80bp revenue margin on assets under management.  With IT cost accounting for 15% to 20% of the cost base in financial services providers, annual incremental IT cost would have reached more than €1.2bn – a substantial part of which could have been captured by Wealth Tech providers.

Banks and financial services firms with all their staff, brand and marketing resources have apparently been unable to capture this potential.  It is time that technology addresses this opportunity for the benefit of all involved.

The key task for the Wealth Tech industry is to create solutions for prospects, not for customers.  German households do not need another portfolio management system, a faster brokerage solution or a fancier online banking tool.  What they really need are solutions that overcome the helplessness and inertia of prospects to invest in capital markets.

What could such solutions look like?  Essentially, they need to be a combination of education, excitement as well as calibration and reassurance – key tenets of Behavioral Finance.  Gamification could be a key tool – providing a fun learning experience, e.g. in assessing risk.  Simulation tools can help overcome misperceptions about capital markets and risk.  Why not include “missed opportunities” in smart watches or smartphone apps – reminding customers that they have foregone thousands of Euros of returns by leaving their money stashed away in sight deposits?  And finally, easy onboarding tools and processes are needed – the author of this article was appalled to recently receive paper-based instructions from the online broking division of a large German bank on how to do an identity check at the post office for legitimization.

Moving from client-centric to prospect-centric solutions, the Wealth Tech industry could jump-start a new revenue pool for the financial services industry of which it can capture a substantial share for itself.  At the same time, it would help create additional wealth for German private households.  And last but not least, the government would also be a happy beneficiary:  In our “sight deposit surplus to global capital markets conversion” scenario outlined above, the taxman would have collected an additional €87bn from capital gains tax.

For everyone to be a winner, the WealthTech industry will need to take the lead.